The famous opening line of Slaughterhouse-Five, is a tease of a sentence. Is Vonnegut giving us a memoir, or fiction? Or is he challenging the very nature of memoir? Who says that fiction is any less true than non-fiction? In an era when memoirs are frequently unmasked as fiction, why do we even bother with the distinction? To quote Oscar Wilde in his essay, The Decay of Lying, “There is such a thing as robbing a story of its reality by trying to make it too true.”

In a telling exchange during an interview with The Paris Review, the interviewer asks Vonnegut, “You went to Cornell University?,” to which Vonnegut replies, “I imagine.”Just like that conspicuous “more or less,” this odd qualification pulls the reader up short. Surely, he would know if he went to Cornell? The interviewer is equally stumped. “You imagine?” he asks. By way of an answer, Vonnegut offers an anecdote. “I had a friend who was a heavy drinker. If somebody asked him if he’d been drunk the night before, he would always answer offhandedly, “Oh, I imagine.” I’ve always liked that answer. It acknowledges life as a dream.”

Slaughterhouse-Five, likewise, has the quality of a dream. The improbabilities of the story do not undermine the truth of the novel, because it’s about war’s absurdities and horrors, and how the mind might neutralize trauma by blurring time and retreating into fantasy.

In the Paris Review interview (actually a composite of four that he conducted over a decade), Vonnegut recalled his capture during the war. He and his scouting unit of six – “and about 50 people we’d never met before” – were shelled by German soldiers after being surrounded in the snow; after being told their situation was impossible, the men did the sensible thing and surrendered. “They said the war was all over for us, that we were lucky, that we could now be sure we would live through the war, which was more than they could be sure of,” Vonnegut recalled. “As a matter of fact, they were probably killed or captured by Patton’s Third Army within the next few days. Wheels within wheels.” 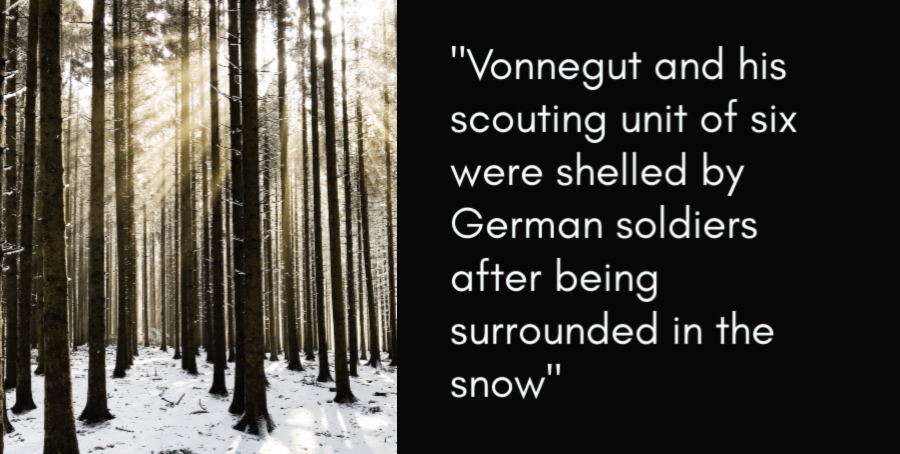 As for Dresden, Vonnegut described it as “the first fancy city I’d ever seen. A city full of statues and zoos, like Paris.” He survived the notorious bombing two stories below ground in a cement meat locker. “It was cool there, with cadavers hanging all around,” he recalled. “When we came up the city was gone.” Some years later, Vonnegut would find himself sitting before the admissions officer at the University of Chicago, and realize he’d been among the bombers who torched the city. “I think he felt the bombing was necessary, and it may have been,” he said. “One thing everybody learned is how fast you can rebuild a city.”

It wasn’t until 1963, when Vonnegut read David Irving’s The Destruction of Dresden that he appreciated the singular nature of what he’d witnessed. Ironically, Irving would turn out to be a notorious Holocaust denier who claimed that Jews were not gassed at Auschwitz. It was Irving who first proposed that 135,000 people had been killed in Dresden—a figure apparently based on a single source with no supporting evidence. Historians now think the toll was closer to 22,700 to 25,000 people. You might say that’s irrelevant, since 25,000 people is still an extraordinary number (nine times the casualties of the 9/11 terror attacks), and even one death is abhorrent, but Irving’s lifelong attempt to exonerate Nazis and diminish the suffering of Jews illuminates the particular challenge of novels about the Second World War. Any depiction of World War Two suffering can’t be isolated from the obliterating fact of the Nazi death camps. Yet in making his novel so wryly comic, so abstracted from realism, Vonnegut is able to express empathy for the victims of the Dresden bombings without simultaneously appearing to apologize for Nazi crimes. By taking it out of the realm of mechanical fact, he turns Slaughterhouse-Five into an existential soliloquy on the evil of war.

Please Join the 1969 Book Club to discuss the next book in our series, Graham’s Greene’s Travels with My Aunt, at 5pm on Sunday 7 April at The Laundrette, Narrowsburg. Purchase copies of all of our 1969 Book Club titles, individually or as a group, here.